This Is A Custom Widget

This Sliding Bar can be switched on or off in theme options, and can take any widget you throw at it or even fill it with your custom HTML Code. Its perfect for grabbing the attention of your viewers. Choose between 1, 2, 3 or 4 columns, set the background color, widget divider color, activate transparency, a top border or fully disable it on desktop and mobile.
Call Us Today! 818.886.6479|info@mobilehomemagazine.org

We are very excited to announce that John Bertaut, ex-GSMOL VP and his group (Sacramento Area Coalition of Mobilehome Owners) have accepted our offer of a FREE magazine to help them with their advocacy.  They will give the magazine a new name and use it to publish information for residents in the 15 or so parks in their Coalition.  We see this as a beginning of our Regional Group Plan, and UNITY (groups will act independently, but share and network via the magazine).  John’s Sacramento magazine, as well as others once they come on board, will be displayed on a new website, perhaps titled United Mobilehome Owners of California.

Now your advocacy can have a voice via the magazine.  We will offer the magazine FREE to any advocacy in California who serves mobilehome owners.  All we ask is for you to be transparent and responsive to those you serve.  Call Frank for details (818-886-6479).  We especially would like to see our friends in San Jose and Hemet get on board.  Lets work together. 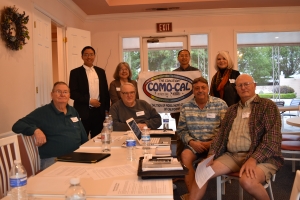 The meeting began with an update on the crisis brought about by the demise of GSMOL and the loss of the lobbyist,Brian Augusta, who represented MH owners interests in Sacramento.  Our efforts, to warn the Community that this was inevitable unless action was taken to remove the “bad apple board members” leading GSMOL, fell on deft ears. Had the Community acted on our alerts, and had GSMOL leaders embraced our suggestions and assistance, GSMOL  would still be viable today.  Now it is too late.  Two Vice Presidents have resigned because they encountered a majority board much like that described in George Smith’s Lawsuit in 1999.  Their resignations validate what we have been saying all along – GSMOL is being run by a small group more interested in themselves than MH owners.  They have conspired to deceive MH owners into thinking GSMOL is “alive and well,” and that they have been doing a terrific job, when in fact GSMOL has been losing members and income since the late 1980’s.  Today it is out of money and won’t survive.  The latest Californian is another example of their deception.  There is NO MENTION of any crisis  in GSMOL.  It is “business as usual.”  When in fact it is very far from “business as usual.”  Those leaving predict GSMOL can continue only a few more months.

Contrary to misconceptions by some, there have been times when COMO-CAL and GSMOL worked very well together.  GSMOL’s focus has always been Sacramento (after all that’s why they are a 501(c)4 – a nonprofit that can lobby).  COMO-CAL’s focus has always been grass roots, working with HOA’s and residents on issues they face in their parks (COMO-CAL is a 501(c)3 – we are a nonprofit that can not lobby).  The loss of a lobbyist, representing our interests in Sacramento, should be a huge RED FLAG to all MH owners in California.  The Community simply can not afford to turn a blind eye anymore.  This can soon have HUGE CONSEQUENCES if we do not UNITE and work together.

The balance of the meeting focused on The Regional Group Plan. The RG Plan works.  It gets advocates working together for the first time in many years.  It eliminates competition.  Regional leaders now have the resources to really make a difference in their area.  No one is telling them how to advocate.  No one is taking money from their members.  Each Regional Group (RG) works independently of the rest of the state.  Each RG communicates, networks, and shares with all other RG’s.  NO ONE IS AN ISLAND.

We see no problem starting a Regional Group for L.A., Orange County and North County San Diego by June 2016.  And we hope our efforts here in Southern California will be embraced by advocate leaders in Northern California.  We can no longer afford to be divided.  Strength in Numbers.  Our hope is all MH owners get behind our efforts to UNITE.